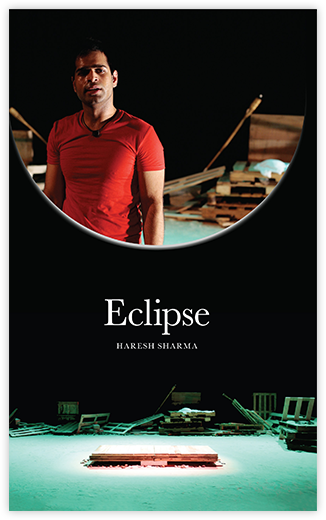 The publication of Eclipse is available at:
The Necessary Stage, BooksActually, Select Books and Kinokuniya bookstores.
Retail Price: $15.00
ISBN No. 978-981-09-1534-6

A young Singaporean man is making a journey to his father’s birthplace in Hyderabad, Pakistan. With him are his father’s ashes. As he makes the arduous trip, he retraces the original journey made by millions of people — including his parents and grandparents — in 1947, during the partition of India and Pakistan.

A play that looks at three generations of men struggling with their dreams and their journeys, Eclipse is an intimate look at personal stories affected by historical events.

First staged to critical acclaim as a short play by Scotland’s 7:84 Theatre at Traverse Theatre, Eclipse was developed into a full-length production and presented in Singapore as a Fringe Highlight of the M1 Singapore Fringe Festival 2008.‍

Eclipse was launched with a reading and book signing session on 12 September 2014 at BooksActually.