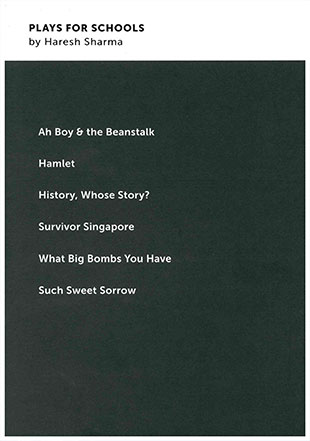 The publication of Plays for Schools is available at:
The Necessary Stage, BooksActually, Select Books and Kinokuniya bookstores.
Retail Price: $20.00
ISBN No. 978-981-07-2913-4

In November 2012, local theatre company The Necessary Stage launched Plays for Schools, the fourth collection of plays by the award-winning local playwright.

The plays featured in this anthology include contemporary adaptations such as Hamlet, Such Sweet Sorrow (based on Romeo and Juliet), What Big Bombs You Have (referencing Little Red Riding Hood) and Ah Boy & the Beanstalk (based on Jack and the Beanstalk). The collection also includes the hugely entertaining History, Whose Story? and Survivor Singapore, the latter being previously staged to full houses at the M1 Singapore Fringe Festival in 2007.

This compilation also includes an introduction by Alvin Tan, Founder and Artistic Director of TNS, as well as Resident Playwright Haresh Sharma’s notes on the plays.

‍Ah Boy & the Beanstalk
This age-old adventure tale is dramatised in a context relevant to young Singapore. The play creates many new twists and turns and breathes a whole new life of meaning into this magical tale. Through Ah Boy and his good family pet Ah Cow, the value of relationships above material comfort and success is conveyed. The play explores issues of greed, materialism, bravery and family responsibility, all in a style that readers will find entertaining.

Hamlet
Shakespeare's classic dramatic text is re-written to give meaningful access and relevance to our youths, whilst still engaging with the key characters and the core issues of family conflict, betrayal, madness and suicide.‍

History, Whose Story?
History, Whose Story? touches on Singapore's history in order to stimulate a discussion on the importance and relevance of history in the daily lives of students. It focuses on the relationship between Sir Stamford Raffles and Munshi Abdullah, as well as popular characters from Singapore's past, and is told through the eyes of a present-day student who discovers the many different voices of history.

‍Survivor Singapore
A group of students have been given the task of creating projects that ‘think outside the box’. They wrack their brains to find what they can do that will really MAKE A DIFFERENCE. Instead of going on field trips learning to make ketupat or performing a multi-racial dance, they decide to create projects that will make young Singaporeans VALUE LIFE and not take their comforts for granted. They decide to create SURVIVOR SINGAPORE. But… have they gone too far to prove a point?

‍Survivor Singapore touches on issues such as identity and community, and the youthful passion to fight for what you believe in.

‍What Big Bombs You Have
Once upon a time, there was a little girl who was asked to go to her grandmother’s house. Did she make it there? Or did she disappear? Was she kidnapped by someone close to her? Or did she stray from the path?

A reworking of the Little Red Riding Hood, What Big Bombs You Have is a story of imminent danger and fear that we all feel. Meet the Wolf who can’t fight to save his life, the Grandmother planning a mass suicide, the overprotective Hunter… and the Little Girl who’s afraid of the dark.

With bomb recipes found over the internet, mass suicides, killings in schools, the threat of emergency looming over us, we live in a SCARY world.

‍Such Sweet Sorrow
Based on true stories which have shocked us, touched us, or inflamed us, Such Sweet Sorrow grabs Shakespeare's Romeo & Juliet and squeezes out the essence of intense relationships. A ritual killer, a distressed construction worker, a blindly loyal wife, twins who want to live as individuals... the characters in this play are desperate and on the verge. And they will bring you on a journey of EXTREME LOVE

Whether or not you are familiar with Shakespeare's text, this edge-of-your-seat, heart-in-your-throat new remix will bring you to the very core of the contemporary R and J that is inside each and every one of us.