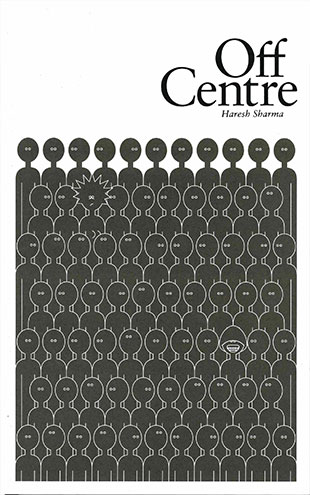 There are two editions of Off Centre—a regular one as well as a student's edition—which are available at:
The Necessary Stage, BooksActually, Select Books and Kinokuniya bookstores.
Retail Price: $14.95
ISBN No. 981-05-6039-7

“Off Centre marks a new maturity in Singapore theatre, addressing an audience prepared to be challenged”
—Hannah Pandian, The Straits Times, 3 Sept 1993

‍Off Centre is The Necessary Stage’s landmark play in the history of Singapore theatre. First staged to great acclaim in 1993 under the direction of Alvin Tan, it is best remembered for bringing mental illness and its patients’ plight to the attention of the media and the general public. Over the past 24 years, Off Centre has been made into an experimental feature film, adapted into a television movie, given a full reading in the UK, taught at a University in Kuala Lumpur and translated and staged as Otak Tak Centre in Kuala Lumpur. As one of The Necessary Stage’s landmark works, Off Centre is part of the Singaporean canon of literary works, and is also the first ever Singapore play to be offered as part of the GCE 'O' Levels literature syllabus.

The play uses effective techniques of flashbacks; moving the characters in and out of of their schizophrenic and normal selves to elicit the rational and emotional experiences of Vinod and Saloma, the two young protagonists. It is not an exaggeration to say that the play touched every person in the audience when it was staged in 1993/1994.‍

Off Centre has also been selected by the Ministry of Education as the first Singapore play to be offered as a GCE ‘O’ Level literature text from 2007, and has been republished by The Necessary Stage. Two editions are now available – a generic edition as well as a student's edition which includes resource notes by Dr Christine Hatton of the National Institute of Education, a special introduction from A/P Kirpal Singh of the Singapore Management University, as well as a foreword by The Necessary Stage’s Artistic Director, Alvin Tan.

In 1993, The Necessary Stage (TNS) was commissioned by the Ministry of Health (MOH) to create a work on mental illness and the challenges mental patients face when trying to re-integrate into society. When the script was submitted, MOH wanted some "technical changes" to be made. However, TNS felt that these alternations would not do justice to the process or the portrayal of mental illness in the play. As a result, TNS and MOH mutually agreed not to collaborate on Off Centre, and TNS staged the play in its full version on its own.

TNS and MOH agreed that they might work on another project the following year on mental illness.

A collation of articles and a review about the controversy surrounding Off Centre can be found below for reference.‍

“A hard nut to crack”
The New Paper‍

“Off Centre on target about mental ills”
The New Paper, Tuesday 21 September 1993‍

“Play on mental health to be staged again”
1994‍

The full performance of the 2007 restaging of Off Centre has been released as a DVD by The Necessary Stage. The DVD also includes special features such as interviews with the creative team and cast.

The DVD is availabe for purchase at $25 a copy at The Necessary Stage. For more information, please call (65) 6440 8115 or email admin@necessary.org