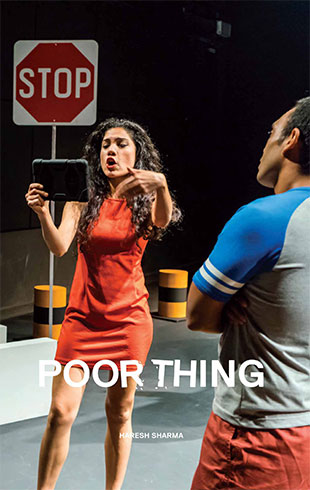 Following Resident Playwright Haresh Sharma’s conferment of the Southeast Asian Writers (or S.E.A. Write) Award (Singapore), The Necessary Stage (TNS) celebrates with the launch of the publication, Poor Thing in 2015.

First staged at the TNS Black Box in 2014 to critical acclaim, the production was nominated for Best Original Script and Best Ensemble at the 15th M1-The Straits Times Life! Theatre Awards.‍

Poor Thing, TNS' ground-breaking production by Alvin Tan and Haresh Sharma, grapples with the issue of road rage. A unique production involving social media interaction, audiences of Poor Thing were invited to watch a video clip of an accident before they enter the theatre to catch the 'live' action on stage. During the performance, more clips were posted online which audiences could view and comment on. Poor Thingchallenges you to explore what drives road rage in Singapore.

This publication includes a foreword by Alvin Tan, Founder and Artistic Director of TNS, as well a selection of photographs from the performance. Reflections on the production from the performers—Dwayne Lau, Joshua Lim, Sharda Harrison and Siti Khalijah Zainal—are also featured. This accompanies notes on the social media interaction elements in Poor Thingby Jason Ng, the Production Stage Manager of the staging.