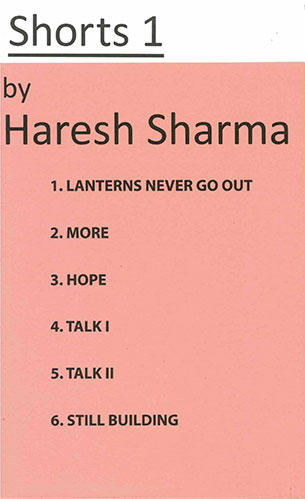 “In the world of Singapore theatre, few can doubt that Haresh Sharma… is among its most powerful drivers”
—Kirpal Singh

After the successful launch of Trilogy, The Necessary Stage returns with another collection of plays, Shorts 1 by Haresh Sharma.

This collection of six plays contains some of Sharma’s best and most popular early works. Three of them, Lanterns Never Go Out, Still Buildingand More have been published in a previous collection, but which is no longer available.

The other three plays, Hope, Talk I and Talk II have never been published before.

The collection also contains an introduction by Alvin Tan as well as notes to each play by Sharma.

Lanterns Never Go Out, which was first staged in 1989, was later restaged for the Singapore Arts Festival 1990. The play resonates with its coming-of-age tale about Kah Wei, who finds herself in transition between school life and adult life. It has been performed numerous times since then, as adaptations, as well as by many schools. Originally directed by Alvin Tan.

Still Building was first staged in 1992 and has since been restaged several times, both in Singapore and overseas in London, Glasgow and Cairo – for the Cairo International Experimental Theatre Festival where actor Karen tan was awarded a Merit Prize. Two stories are told side by side in Still Building – that of two sisters and a friend, trying to come to terms with their relationships; and three colleagues trapped under the rubble after the collapse of a building. The play was also awarded a Merit Prize at the 1993 Singapore Literature Prize and subsequently published in 1994. Originally directed by Alvin Tan and Josephine Peter.

‍More was first staged in 1991. Since its first publication, the play has been popular with schools and students, especially for the Singapore Youth Festival. An ensemble piece, the play takes a satirical look at materialism and the definition of success. Originally directed by Alvin Tan.

‍Hope was staged in 1994 and remains Sharma’s only play which he has not seen performed live. He was in the UK during that period on a Shell-NAC Scholarship, pursuing his Masters in Playwriting Studies. Hope tells the story of four people whose lives begin to interconnect in real and surreal ways. Originally directed by Kok Heng Leun.

‍Talk I, which was first staged in 1994, is an ensemble piece where 3 actors play a host of characters in a talk show. Stories of cinema bullying and gender discrimination are played out in both comic and tragic fashion. Originally directed by Alvin Tan and Kok Heng Leun.

‍Talk II is a reworking of Talk I. It was initially staged in 2000 at The Necessary Stage’s Black Box as part of the triple-bill to launch the Company’s move to Marine Parade. The play still featured a talk-show format but with 2 actors playing numerous characters. The play went on to tour various cities as part of a double-bill Untitled Women Talk. They include Busan [Asia Theatre Festival], Macau [Macau Fringe Festival], Delhi and Dublin [Dublin Fringe Festival]. Originally Directed by Alvin Tan.‍

“The early plays by Sharma have a freshness and vitality which open up spaces for asking new questions of regimes and political systems. They raise new ideas about issues often overlooked on stage. Sharma doesn’t create a discourse of antagonism or aggressive advocacy for change. Rather, he gently opens up little corners, pushes aside, just a little, the curtains, to open up a new discourse of what it means to be the first adult new Singaporeans post separation.”
—David Birch, Interlogue Studies in Singapore Literature Volume 6: Haresh Sharma