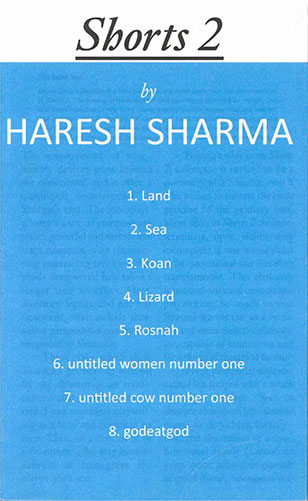 Following in the footsteps of the earlier Shorts 1, this second instalment represents some of Sharma’s best and most popular early works.

The plays featured in this anthology include Land, Sea, Koan, Lizard, Rosnah, untitled women number one and untitled cow number one, as well as godeatgod, which has received multiple rave reviews both locally and internationally. Untitled women number one, untitled cow number one and Koan have also been staged at various international festivals. Out of the eight plays featured in this collection, six of them have never appeared in print before.‍

Land
A plot of land transforms from a cemetery to a condominium site. In the process, three stories are presented where ancestors are worshipped, ghosts are unearthed and a handphone becomes a murder weapon.

Sea
Sea is about two sisters on a boat trip. Trying to come to terms with an illness, they journey into different stories – of adventure, of humour, of horror.‍

Koan
Drawing inspiration from Hermann Hesse's Siddhartha, Khalil Gibran's The Prophet and other stories of journey and search, Haresh Sharma employs techniques of storytelling, magic realism and narrative framing to create a theatrical and lyrical exploration of perspective and truth. The production also features interview footage with a 78-year-old Singaporean widow who talks about her husband, her son and herself growing up in Singapore.‍

Lizard
Mother, son and maid. A family turns topsy-turvy as they threaten to blow each other up.‍

Rosnah
Rosnah is the story of one young woman's journey when she leaves home for the first time to study in London. The play crosses boundaries between cultures, traditions and trends.‍

untitled women number one
Two women talk about their relationships, their past and future. The text makes references to gender, quoting stories about women and talking about sexuality, but ultimately the play transcends its very title in its portrayal of pain, death and interdependence.‍

godeatgod
A layered and moving exploration of power, sexuality, spirituality and survival in the post traumatic world, this multi-media, multi-racial and multi-national romp is interwoven with the stories and emotional landscape of its characters. godeatgod is an intimate, personal and at times funny exposition about trying to live a better life; a take on censorship in the context of art; and an examination of love and grief.